The library's blog can be found at

The purpose of this library

This is a personal project to have fun with bibliography and book collecting, and to share the knowledge and the adventure. The website is

updated on an almost daily basis, so there is always new material to be found.

For the purpose of defining the extent of this library, the widely-accepted delineation of Asian regions and nations is followed:

However clear cultural boundaries blur at the Western borders of Russia, mostly as a result of Russian influences upon the rest of the Soviet Union. Ukraine, one of the original constituent republics of the USSR from 1922 to 1991, is largely seen as a Eurasian nation as opposed to a geographically Asian one, however Ukrainian authors of speculative fiction (several of whom also wrote in Russian) identified as Soviet and featured in anthologies alongside Russian authors. Therefore for the purposes of this library speculative fiction from the Ukraine (and the Ukranian diaspora) is also included.

The library's 'rules of acquisition'

•  Speculative fiction novels, collections and short fiction chapbooks by Asian writers are automatically eligible for inclusion in the library, as are

such by writers of the Asian diaspora living outside of Asia. This is the central purpose of the library and no preference is shown for writers

aspects of Asian cultures, are eligible for inclusion as are those that predominantly feature Asian protagonists/antagonists. Speculative fiction

that is unrelated to Asia by non-Asian authors is not eligible for inclusion.

•  Speculative fiction novels, collections and short fiction chapbooks about fictional countries within (or islands surrounding) Asia, by Asian or

non-Asian writers, are eligible for inclusion.

•  When themed or unthemed speculative fiction anthologies have contents either in whole or in part from Asian writers, such anthologies are

eligible for inclusion. General anthologies not themed in any way on Asia and with less than half of contents provided by Asian writers may still

appear here for reference purposes, but have a lower priority for collection. Collected fiction, poetry, essays or interviews by Asian authors, or

relating by subject to Asia, are highlighted in white among non-related works for ease of reference.

•  When magazines, webzines, academic journals or fanzines have contents either in whole or in part relating to Asian speculative fiction, they are

eligible for inclusion. For reference purposes this website will still include details of individual issues if they contain such contents despite being

absent from the library itself. Collected fiction, poetry, essays or interviews by Asian authors, or relating by subject to Asia, are highlighted in

white among non-related works for ease of reference.

•  While not strictly conforming to the 'rules of acquisition' outlined above, some works are nevertheless included in the library because of their

importance to the genre while referencing Asia or Asian activities in other speculative ways. Examples are The Man in the High Castle by Philip

K. Dick and The Word for World Is Forest by Ursula K. Le Guin. Reasons for inclusion are given in the Notes for each publication.

•  While the library currently has no Special Collections, it does also attempt to include complete speculative fiction of non-Asian authors who were

(or are) given permanent residency status within Asian countries: past examples are Arthur C. Clarke and Lafcadio Hearn. The library collects

their speculative and non-fiction publications only, and reasons for inclusion are given in the Bibliographic Comments for each author.

biography of Arthur C. Clarke) and appear under Non-fiction.

Pride is taken in accuracy, but with a data-heavy project like this occasional errors are inevitable particularly regarding ethnicity. If you see something that isn't right please contact the library at the email address found here.

•  To fellow ISFDB editors for aggregating so much data, and without whose contributions significant parts of this project would have been

•  To the writers and fans of speculative fiction who help to steer this project in the right direction with their suggestions and corrections.

"All that is not given is lost."

Currently based in Hua Hin, Thailand, the Big Sky Library is a private library of speculative fiction from and about Asia and the Asian diaspora.

The library currently holds over 1,500 titles in English. It functions as a private library, however it is accessible for research purposes and enquiries and visitors are always welcome. 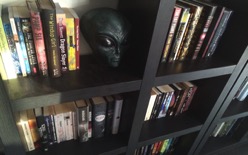